I expose a few of my web services over the Internet like SABnzbd, CouchPotato and NZBDrone (now known as Sonarr). Whilst they all have HTTP authentication, they don't support multiple users. LDAP or Active Directory holds multiple user accounts, for authentication purpose. So putting two and two together, kvsp has made a NGINX LDAP module which authenticates users against your LDAP or Active Directory servers when they visit specific web pages.

To use the NGINX LDAP module, NGINX must be built from source with the module included. For this post, I will be using a fresh install of using Ubuntu 14.04.1 LTS.

First thing's first, download the NGINX source here, the .tar.gz files are for Linux and the .zip files are for Windows. The version depends on you, but I picked the highest 'mainline' version. This is what NGINX has to say about the differences between 'stable' and 'mainline'

The mainline branch gets new features and bugfixes sooner but might introduce new bugs as well. Critical bugfixes are backported to the stable branch.In general, the stable release is recommended, but the mainline release is typically quite stable as well.More light reading can be found on the NGINX FAQ. At this time of writing, I've download NGINX 1.7.7.

The module can be found on GitHub. I recommend doing a git clone to make updates easier. If you're new to git, you may prefer to download the module it as is. Unzip if you have to and place it somewhere you'll remember as well.

Later on if you need to update the module, browse into its folder and run the command:

There are quite a few things that need to be installed for Ubuntu to be able to build NGINX.

You will definitely need build tools. Build Essential will cover most:

Something important that's required is the LDAP development library which allows the module to connect to an LDAP server:

If you're planning on using HTTPS/SSL you will also need the OpenSSL library:

Untar the NGINX source you have downloaded:

Browse into the source folder:

I've found on Ubuntu (but not CentOS), the configure file is not executable. To make it executable:

Now you will need to configure your environment for building. I ran into a few problems at the beginning as I forgot a lot of additional modules which come standard in Linux package managers like SSL (HTTPS), IPv6 and even logging. Another disadvantage are the file paths differ from a package manager installation as well as the 'sites-enabled' and 'sites-available' folder structure. I tried my best to make identical to a package manager installation as I could. This is my personal configure script:

note: please change the path of the NGINX LDAP module in the command below if it differs from mine ( --add-module=/home/$USER/nginx-auth-ldap).

If it does not run successfully then there are some dependencies missing. Looking through the output and reading the error messages can determine which specific libraries are missing. The successful output will look like: 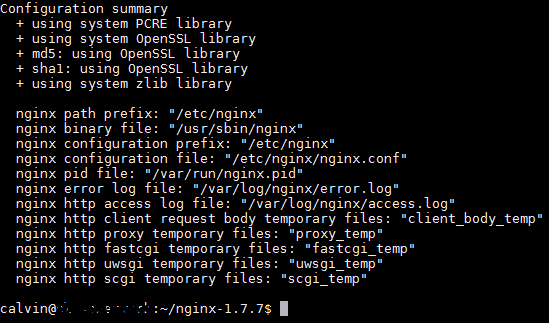 Once it runs successfully (thumbs crossed) it's time to build the system. Just this command:

To finish it off, install NGINX with all the paths and modules we've specified. 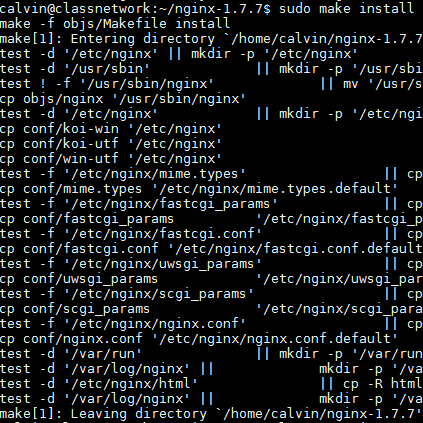 The initialisation script allows you to execute 'start', 'restart', 'status' and 'stop' commands to NGINX. Jason Giedyman has a tried and true NGINX init script but I've modified  for my own configuration. You may  alter either if you have changed the paths differently than I have.

To install the init script:

Now you can start NGINX but running:

Browse to the host's IP address or FQDN to see the NGINX page:

This is an optional step. The idea is to change the layout to include 'sites-enabled' and 'sites-available'. This is similar to how it would appear when installing NGINX through apt-get. It is a more convenient way of managing virtual hosts but not required.

Rackspace has a perfectly good guide on this so I'll leave it for them instead. Make sure to change the paths around as necessary to '/etc/nginx/'.

It's finally time to actually configure the NGINX module we downloaded and built so long ago.

Open up your nginx.conf file for editing:

In here you will define an LDAP server. It is possible to define multiple servers by creating multiple 'ldap_server' blocks. This is what I use to allow all users to login is:

So put this into the nginx.conf file, here's mine!

Now that it's in place, you can apply it under different 'location' blocks. You will need an 'auth_ldap' which displays the message to be shown and the 'auth_ldap_servers' which is the server to authenticate against:

Now access the page again and if successful you will be prompted to login!

We're done! For extra configurations have a read through the nginx ldap module documentation.