My journey from VMware ESXi to purely Docker.

When I first started my homelab 5 years ago, I went with VMware ESXi as my hypervisor and a slew of Ubuntu/CentOS virtual machines because that's what I had learnt from my internship at IBM. This, combined with VLANs for network separation gave me a complete virtualisation environment where I could do whatever I wanted without comprising any service.

The benefits of this setup were:

The downsides of this setup were: 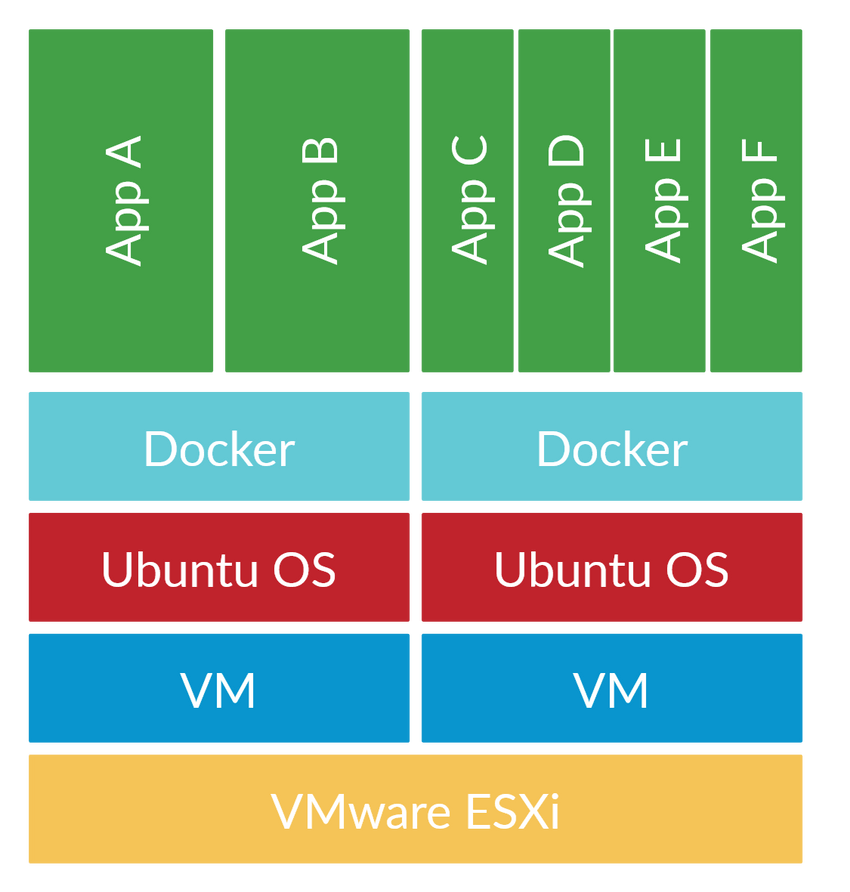 As I was low of memory, I gave Docker a try and was amazed by the reduction in memory usage. Before I knew much about Docker, I assumed a Docker container was another operating system so it would use as much memory as a virtual machine. Docker containers, however, are very lightweight and make use of the existing kernel.

An example of this for running my downloading applications, in Setup 1 where I ran one server per application:

This saw a 2GB drop in RAM usage. Not much, but this is just one example! Other services I combined in Docker pushed those RAM savings further while keeping the maintainability of the system.

The benefits of this setup were:

The downsides of this setup were: 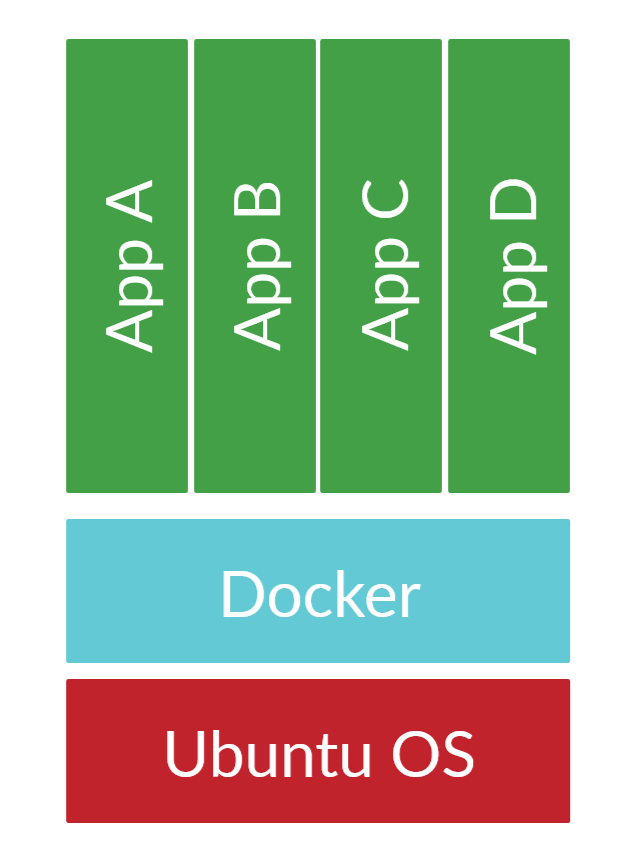 Considering the downsides of Setup 1 and Setup 2, I decided it was time to go a bit further. There were a few considerations:

Looking at the transition of Setup 1 (one application per server) to Setup 2 (multiple Docker applications per server), I was able to combine multiple Ubuntu servers into one. This removed about 200MB of RAM usage and 400MB of disk space for each Ubuntu host that was removed.

In Setup 2 (multiple Docker applications per server), there were still multiple instances of:

So I thought, why not combine this all together into one to remove the overhead? The above diagram summarises it nicely. I still maintain all the same benefits as before while removing the downsides I previously had.

To migrate to a Docker only environment however, there were two solutions I had to find an answer for:

The hardest part of all this was to be able to separate Docker container to different networks so they wouldn't be able to communicate with each other, or hosts not on their network. I found a solution that worked on a single network interface and supported VLANs.

To give some perspective, this was what my previous setup on VMware ESXi looked like. Each port groups would have a VLAN tag: 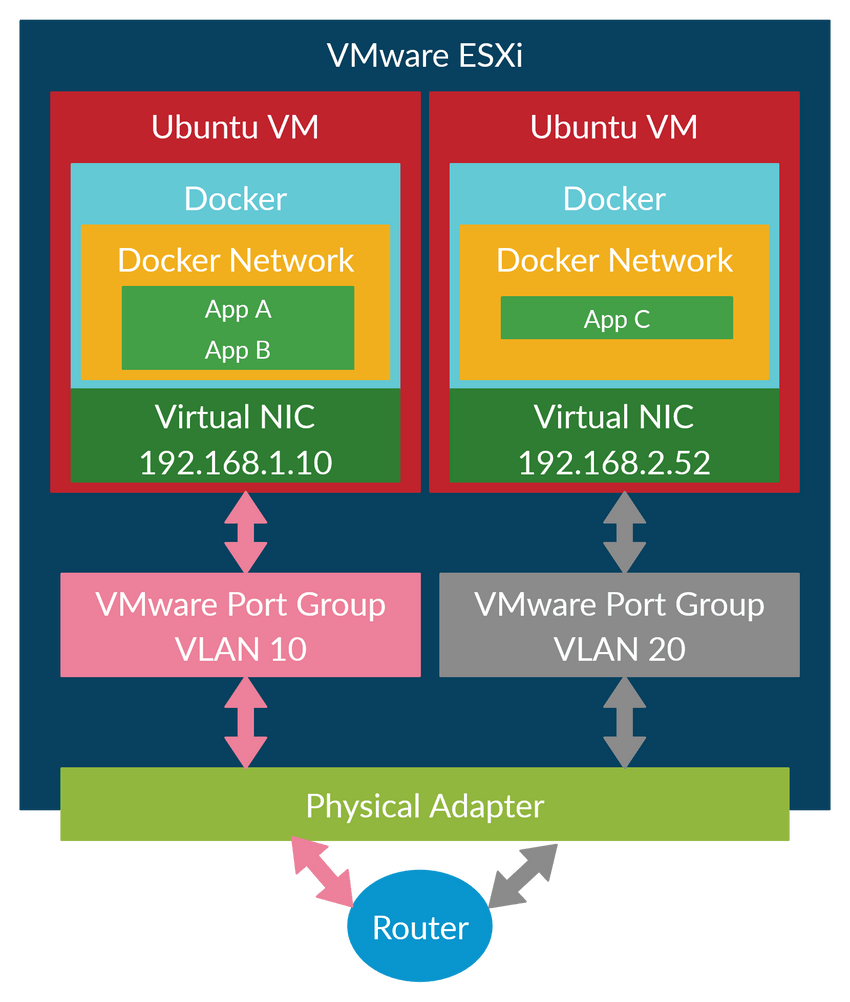 Playing around with Ubuntu's new network configuration tool NetPlan, I was able to create multiple VLANs off a single interface eno1. I set the default gateway to be eno1.10, while the other VLANs did not require an IP address (although you could add one if you like):

Then within Docker, I used the macvlan network driver to physically connect Docker container to a network interface:

Now I have a network called mgmt which is connected to eno1.10. Sadly any containers on the network won't use DHCP so you will have to provide an ip-range for Docker to use. It doesn't care if there's something in that range so be careful.

To create a Docker container on that network:

To enable DNS however, you will have to specify it with --dns or it will use the host computer's DNS which may be inaccessible if the container is on a different network:

To set an IP address, provide the --ip option:

So that now solves our networking so be exactly like before. Each Docker network corresponds to a real network and each container is physically separated from other containers within the same host. Here's a diagram of it: 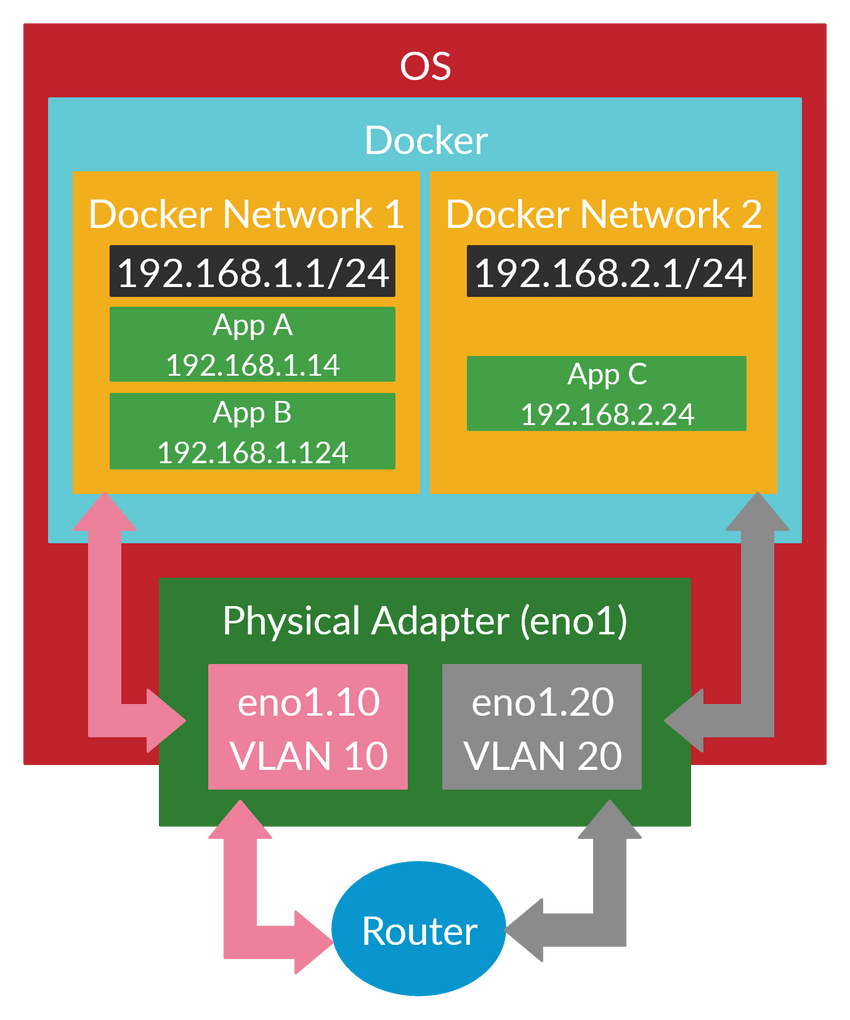 Longer answer is there are two options:

I've gone with option 2 to run Blue Iris, my video surveillance software. jshridha has created a Docker image that runs Blue Iris on top of Wine.

So Wine in Docker on Linux...a recipe for disaster.

Here are stats of the homelab as of right now, running everything I have in the past:

An incredible result when considering I was previously running out of memory, to now not even using half of it.

Now a final benefits and downsides:

Seeing that I made a big change every 2-3 years, this is my guess: